Topangans Drive Out The Fascists

Topanga Canyon is a beautiful oasis running from the Pacific Ocean to Woodland Hills, between the Pacific Palisades and Malibu. I visited there the first time on a trip to California when my first husband picked it out on a map. I found a friend from CCNY on that visit but that is a story for another day. In 1972 I moved to Topanga and it has been my home ever since.

Two weeks ago, I was horrified to see the 19-year-old Topanga Peace Alliance peace vigil at the entrance to Pinetree Circle in Topanga had been displaced by a dozen or so Trumpers waving flags and shouting fascist slogans through a bullhorn. David Troy, the leader of the vigil, was running back and forth frantically trying to block them but he was outnumbered. Immediately a call went out to take back the corner on the following Friday. I was not surprised. I had had to take down Confederate flags at the Community House once so I knew the fascists were in Topanga all along albeit well-hidden for the most part.

The resistance began. The following Friday David brought his truck and a flatbed to block the Trumpers. The Tom Mitchell band played and about a dozen Topangans and friends showed up-- but NO Trumpers except for crazy Allison-- more on her later.

We were not satisfied. We wanted a win-- not a default! The call went out again to rally on the following Friday. Fears mounted as NextDoor, a racist website purporting to help neighbors connect, was filled with calls for the fascists to regroup at Pinetree on Friday. David parked his truck at the corner but called to say that the Trumpers had parked behind him!

Would the fascist Trump truck caravans that drive up and down Ventura Boulevard every weekend dare to come to Topanga? We were worried. We called our friends and neighbors again. We prepared for battle.

On Friday at 4:30 I drove into Topanga. There was no traffic-- no caravan! I got to Pinetree and was gratified to see dozens of Topangans, all masked of course, lining the Boulevard and holding some of the many signs collected by David over the years. The band played. More people showed up. We greeted old friends and new, trying to recognize people behind their masks-- social distancing but happy to see each other after so long.

And behind David's truck were the fascists-- all THREE of them with their big flags and unmasked faces signaling their manliness. There were two guys and one Latina para Trump. While we visited, danced around and gave thumbs up to the honking rush hour cars supporting us, they stood and waved their flags protected by orange cones they had set up along the road. I guess these tough guys were scared they would be run over!

Crazy Allison (below), fascist #4, and a constant scourge, insisted on staying with us and managed to agitate a couple of our guys with her constant taunting. We kept telling her to stay with "her own kind" but she refused. After she got physical one of the fascists came and screamed at us as he hauled her away.

And so the fascists were driven from our Canyon, known for decades as a bastion of peace. Or at least they were forced back underground where they have lurked for years, fearing the light of day and the scorn of their neighbors

Topanga wishes you and yours peace, love and courage in these trying times. Keep the faith and let's drive all the fascists back into the holes they crawled out of the way we did last Friday in my beloved Canyon. 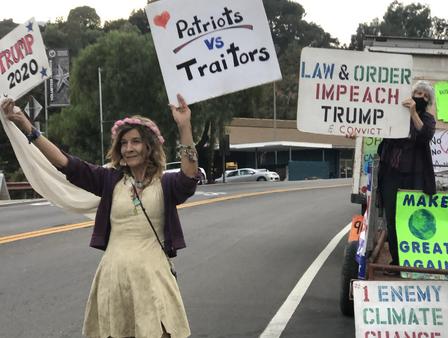 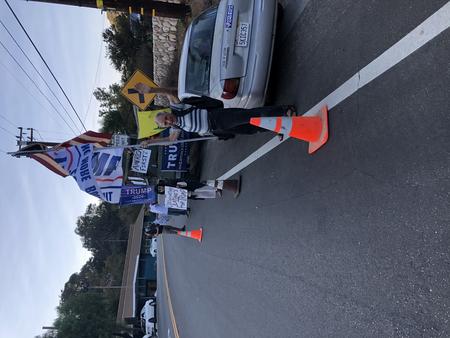 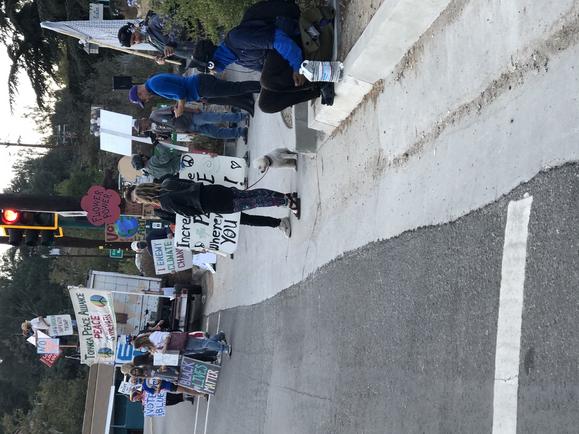